There are many memorials around PNG that honour the fallen. The following is not an exhaustive list. If you have information on other memorials, war graves etc then please use the contact form by clicking here.

Port Moresby (Bomana) War Cemetery lies approximately 19 kilometres north of Port Moresby on the road to Nine Mile, and is approached from the main road by a short side road called Pilgrims Way. See -- www.diggerhistory.info/pages-cemeteries/bomana.htm -- and -- http://www.cwgc.org/search/cemetery_details.aspx?cemetery=2014300&mode=1 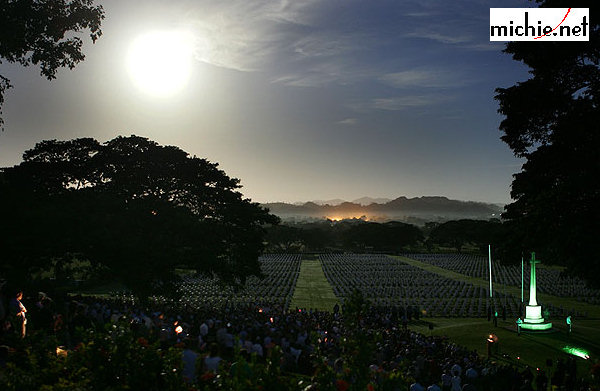 Bomana Dawn Service - thanks to John Salter for this photo

Lae War Cemetery is located adjacent to the Botanical Gardens in the centre of Lae. See -- http://www.diggerhistory.info/pages-cemeteries/lae.htm

The Madang Coastwatchers Memorial Lighthouse is located at Kalibobo Point in the town of Madang. See -- http://www.ww2australia.gov.au/coastwatcher/ -

The Coastwatchers Memorial Lighthouse was erected by Public Subscription and the Commonwealth Government in 1959. It has been in operation since the 15th of August 1959. 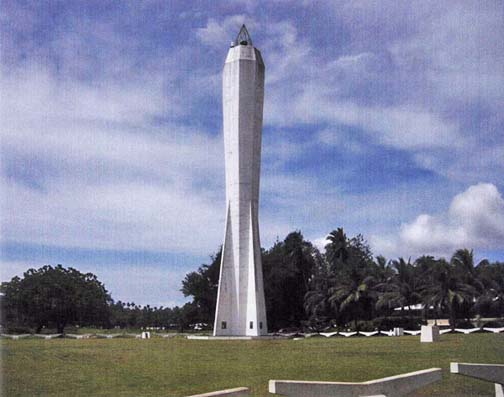 This memorial is located in an area known as the Cape Wom Memorial Park. The pyramidal cairn bears a central plaque which commemorates the surrender of the Japanese Army on 13 September 1945. A further plaque on the cairn commemorates the award of the Victoria Cross to Lieutenant Albert Chowne on 25 March 1945 and to Private Edward Kenna on 15 May 1945 in actions near Wewak

The original memorial in this area was a piece of tin nailed to a coconut tree stump bearing the inscription "This marks the spot of the first land defeat of the Japanese Army in the Pacific. In memory of the Australian men who lost their lives in this action." That sign, its whereabouts now unknown, was later replaced with a more substantial memorial placed at the nearby Turnbull Field.

McDonald's Corner is recognized as the start (or finish) of the Kokoda Trail. If you visit this location you will see a stylised figure of a Digger wielding a .303 Lee Enfield rifle with bayonet.

For a general list of memorials around PNG please visit -- http://www.plaques.satlink.com.au/list/Asian/Papua%20New%20Guinea/index.htm