One type of stilt house in Milne Bay - Other housing

Papua New Guinea is a country of high mountains, forests, lowlands, swamps and of course coral beaches, islands and oceans.  The mountainous part of the country is called the Highlands and the low land part which meets the sea is called the Coastal region.  Naturally enough the Islands region is called exactly that (Islands).

Papua New Guinea, although known to outsiders as one country and one people, consists of many different people who live totally different life styles from one and another.  Believe it or not they speak over 700 different languages, so you see each of them will have their own beliefs and customs completely different from one another.

Life along the Southern Coastal area, especially among the group of people who are known as the Motuans, live slightly similar lives to one another. For example the language they speak is Motu, except you can distinguish the area a person is from by the dialect of the language he speaks.

The Motuans live in villages along the southern coastal area of PNG. They live in houses built on stilts over the sea.  Even today they still like to build their houses over the sea.

(Use your browser's back button to return here)

Stilt houses can last from 20 to 30 years. This will depend on the type of timber used for the posts, so the type of tree they choose is very important.  They just don't go into the forest to chop any big trees down. They have to chop the trees that suits the sea.  If that is ignored, they will probably replace the posts quite often, say every five or so years. 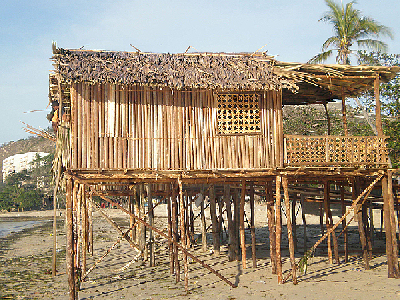 The height from the ground to the floor of the houses are about 3.5 to 4.00 metres.  (for people still using imperial measurements that is about 10 to 12 feet)  This allows for the water level at high tide.

How long it takes to build a house depends on the availability of materials. The posts need to go up first, so in this case, the sea has to be at a reasonable level, to allow men to put the posts up.  It takes the whole village men to help put up the posts because the houses are quite big, as we in live in an extended family style. 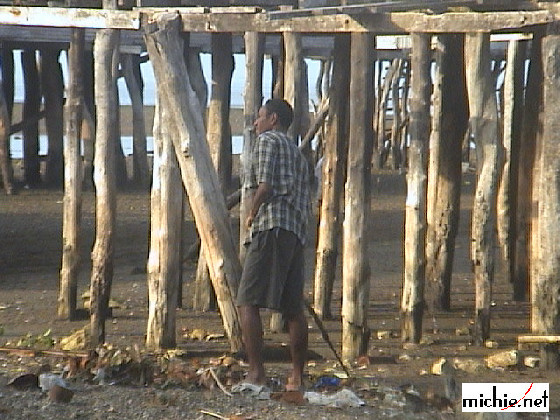 This is what the poles look like up close

To erect one post requires about 20 men.  However, before the post is put up, the end which is to go down in the ground (seabed) is sharpened to allow it to go in easily.  The 20 men divide themselves in half. They tie a strong long rope around the post and half hold onto one side whilst the other half hold the other side.  The place where they want the post to go up is marked, so they just place it in the right spot and start making it stand up at the right place.  The 20 men stand ready on either side while another lot of men support or guide the post as it positioned. Once it is standing, the men holding onto the ropes start pulling in and out until the post is about a metre (3 foot) or so deep, then they go on to the next post and so forth.

Click on this thumbnail to see another stilt village

(use your browser's back button to return here)

Getting water to a stilt house is no problem.  We either run water pipes to the house or simply by going and fetching water from taps in big pots or buckets.

The stilt houses are built to allow for strong winds.  Occasionally an unlucky person will lose a roof by having it blow off, otherwise the houses stand up to storms quite well.

People can use their village houses for trade-stores (tiny shops) there is no problem about that but they don't build Police stations or prisons as in most areas the houses are in a small village or hamlet.  Houses in the town are built from non-traditional materials such as pre-sawn timber and roofing iron, concrete bricks etc.

Getting power (electricity) to a stilt house is no problem.  It can be connected quite easily by an electrician. 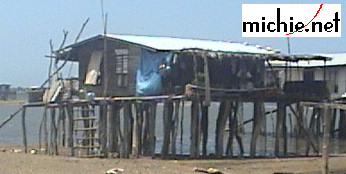 About the writer of this note...

I have lived all my life in a stilt house. So life living in stilt houses and with an extended family is just as normal for me as it is how you live your normal life.

I am married with 5 children.  My children go to school except the small one, who is only 3 years old.  English is our national language, so we have to learn English to communicate with others. I hope this information is good enough to help people doing school projects on stilt houses.

Stilt house over water in Manus.

NOTE: Stilt houses or pile dwellings are houses raised on piles or poles over the surface of the soil or a body of water.