The traditional Tolai currency or shell money called Tabu has become legal tender in East New Britain Province. It has been in widespread use for many generations. Tribute must be paid to provincial administrator Hosea Turbarat who started the necessary work in 1998 that led to the adoption of tabu.

Traditionally Tabu was measured in fathoms, which is roughly from the nose of the person measuring to the outstretched palm. There is also a question of the spacing of shells in the fathom. It would seem that the normal practice was to allow about 5 millimetre between each shell, which means that there would be two shells to a centimetre. 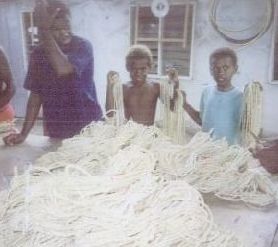 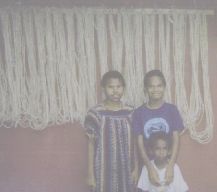 Anne, Elizabeth and Joseph give you
an idea of how long each fathom of Tabu is.

Currently the price of a fathom is anywhere between K2 and K3.50 due to the drop in the value of the Kina.

It is estimated that there is approximately K6 million Kina of Tabu available for sale. This is currently being used to pay for goods bought from markets and even stores.