The C47 (DC3), with the name of "Larry Blackman" attached, is perched on display outside the Air Niugini Head Office at Jackson's Field (airport), Port Moresby. There are Four (4) plaques mounted on the poles that hold the plane giving details of the plane etc. 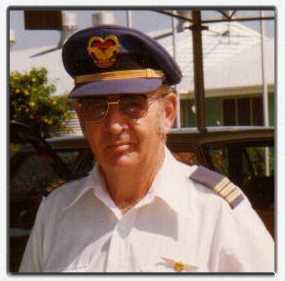 It was mounted there as a monument to all the airmen who have given their lives flying in Papua New Guinea.

P2-ANQ was built as a 26 seat VIP transport in 1943 by the Douglas Aircraft Company at their Oklahoma City plant. The serial number of the plane is 27110 and the model is C47B-20-DK. It became 43-49849 for the United States Army Air Corps. Along with many other C-47s it was transferred to the Royal Air Force becoming known as KN241 as a Dakota 4 and presented to the British General Bernard Montgomery "Monty" by the American Supreme Commander, General Dwight D. Eisenhower.

Monty used the aircraft extensively throughout the European campaign during the last years of the Second World War.

After the war the aircraft was retired in July 1953 and was registered as G-AMZH. It was put into service as a personal VIP carrier for Greek shipping magnate, Stavos Niachos. It was actually registered in his wife's name - Mrs. E. L. Niarchos. During this time it was operated by Transair on behalf of the Niarchos Shipping line. When Transair became part of British United Airways in July 1960, the DC3 was transferred to the company's Channel Islands Airway Division. It was later sold to Handley Page Ltd in May 1965.

Mr T.D. (Mike) Keegan of Keegan Aviation delivered the aircraft to Essendon Airport (Melbourne - Australia) on the 16th of May 1965, for Trans Australia Airways (now merged with QANTAS) who had purchased the plane to use on their Sunbird Services in Papua New Guinea.

It was registered on the 22nd of September 1965 as VH-SBW. When VH-SBW was purchased by TAA it had only flown a little over 4,500 hours. - This was considered to have been the lowest number of hours logged on a DC3 at that time.

On entering Papua New Guinea service the plane was named "Jim Taylor" after the famous patrol officer who was one of the first white men to "discover" the Eastern and Western Highlands during the 1930's.

The plane became one of the Air Niugini fleet in 1973 after the formation of the airline and, in 1976, was registered P2-SBW. In line with Air Niugini policy of registering all their aircraft into the P2-AN block the plane was re-registered as P2-ANQ on the 7th of November 1975. Air Niugini now (2012) also uses the P2-PX block of registrations.

The DC3 registered as P2-ANQ flew many thousands of hours in PNG providing safe, reliable and comfortable executive type transport for many passengers who flew in her.

When the Fokker F27 and Fokker F28 aircraft were introduced, all DC3's used by Air Niugini were retired from airline service. The last revenue service for P2-ANQ was a charter from Losuia to Port Moresby on the 13th of June 1977 under the command of Captain W. Fuller and N. Kile. Several training flights were carried out after this final revenue flight and the last flight was on the 27th of July 1977 when Captains Fuller and J.Holmes made a local flight. At this stage the plane had only flown 16,473 hours and 40 minutes - relatively few for a DC3.

This DC3 (P2-ANN) was less fortunate than the Larry Blackman
The serial number of this plane was 10,000

In 1979 Air Niugini mounted P2-ANQ and named her after a very well-known and highly respected pilot - Larry Blackman. He had commanded that aircraft for many of the 17,000 hours that he flew in Air Niugini DC3's. The plane was towed to its final resting place on the 11th of February 1979 and hoisted into place on the 21st of February. On the 23rd of February 1979 the Minister for Transport and Civil Aviation, Mr Paias Wingti, unveiled a plaque attached to the base of the rear support.

On the 4th of February, 2001 Captain Dave Wiltshire, the Executive General Manager of Air Niugini Operations managed to gather together a band of keen workers to give a bit of a spring clean to the aging plane. Here are some photos of the event.

Captain Wiltshire, an experienced jet pilot flew this plane and other DC3's in a pre-independent PNG for Trans Australian Airlines (TAA now QANTAS). The Captain has had much experience in lovingly renovating DC3's. He is responsible for getting VH-AES off a pole and back into flying condition again. VH-AES was registered in Pre independent PNG as VH-SBA

I will hopefully have photographs of VH-AES for display on this web site very soon as I was able to take a few photographs of the plane, in its hanger, at Qantas Engineering Maintenance facility in Melbourne recently.

Farewell to the Designer of DC-3 plane.

Arthur Raymond, whose aircraft designs ushered in an era of global air travel and made the world a smaller place, died two days before his 100th birthday in March 1999.

Raymond was largely responsible for the design of Douglas Aircraft's DC-3, the world's most popular plane for more than two decades. His DC-2, the DC-3's predecessor, revolutionised the fledgling aviation business in 1934 by becoming the first passenger plane able to turn a profit without subsidies from the US Mail.

In 1935 his rugged, economical, twin-engine DC-3 design was introduced and quickly became to be the world's most popular aircraft. Douglas made 11,000 of the 21-passenger plane which helped it dominate the airliner market until the advent of the Boeing's 707 jetliner in the late 1950s.

The DC-3 incorporated much of aviation's cutting edge technology including semi-retractable landing gear and wing flaps. The plane was so aero-dynamically sound that pilots said it almost flew itself.

Thanks to Captain Peter Sharpe and Eva Arni, both of Air Niugini, for the above two items.