On Independence Day, the 16th of September, every year or as close as the school can get due to public holidays we, including the teachers from overseas, dress up in the the appropriate traditional dress. Children, who have parents from different provinces have the opportunity to choose the province they want to represent.

Since my mum is from Milne Bay I dress up in the Milne Bay traditional gear. Milne Bay is a large province consisting of mainland Papua New Guinea as well as many different islands so there are many different types of traditional dress. The picture you see below is a small representation of what you can expect from the Province. 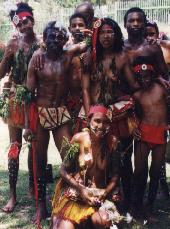 Buai is a key part of any celebration or event in PNG.

The photo below shows some of the gang from Korobosea International School on a recent Independence Day celebration. I am hidden away just to the right of the middle somewhere with my headress of feathers. 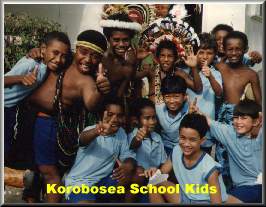 The Trobriand people of PNG traditionally build a small house to store their yams (sweet potatoes).

The Picture below is a model Bwema or yam house built by the Korobosea students to celebrate Independence Day 1998.

Another Page on Korobosea School